One May holiday we took a trip up to the lovely East Neuk of Fife for a quick break in our caravan.. The weather wasn't quite as lovely all the time, but fortunately I'd looked at the forecast and taken up the Skirmish Board and accompanying kit, all compactly stored in a Pizza box. Almost as a demonstration of concept, when the rain started I cleared the small caravan dining table, set up and had a game with Arabiansquire. Almost in keeping with the pseudo impromptu nature of the game I'd forgotten my camera, so had to borrow the wee lad's ipod for photographic duties. That is the first of my poor photo excuses. If you need more, please apply in writing - I have loads! 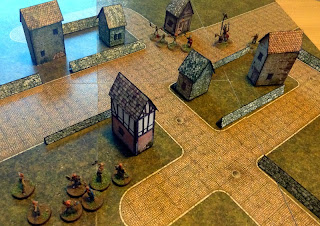 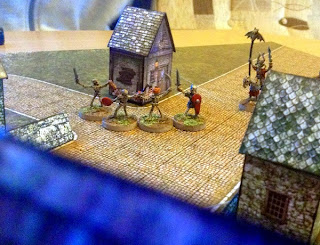 The Undead marched brazenly up the High Street. The Walking Dead taking advantage of the "single move if further away than 2 x long" rule to make progress. 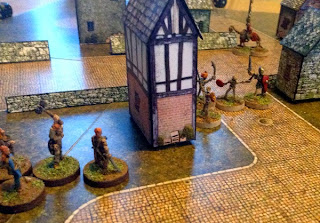 The barbarian leader tried to move his undisciplined mob toward the enemy, but his Undead obviously had his charges more in control and the skeletons gathered behind a building waiting to strike and out of sight of the ranged threat. 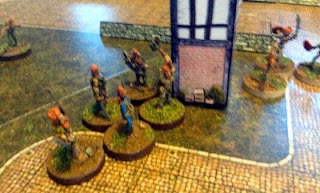 With the Undead Warriors out of effective reach the Barbarians gathered round their leader and waited for action. The slingers moved to try and spot a flanking shot. 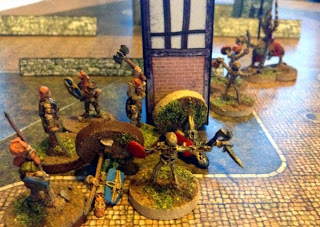 They didn't have to wait long. The first Skeleton charged round the corner, but was knocked to the ground by a mighty 2 handed barbarian axe. The next skeleton was more clinical and killed it's living foe. a turnover saw further advances prematurely halted. 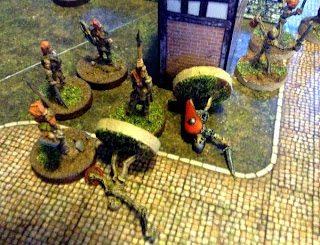 This gave the human's time to recover. The Axeman first finished off his quarry with a single blow before moving into contact with the other skeleton. The next barbarian stepped forward to attack, and with the force of a power attack adding to the outnumbered situation the skelton was soon dust. 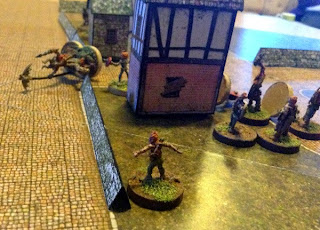 A slinger though had spotted the Undead Leader round the building and took him out. The resulting morale test for the Undead left them a further warrior and Walking dead down. 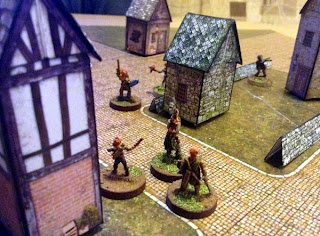 The remaining Undead retreated to regroup, and the Barbarians gave chase. 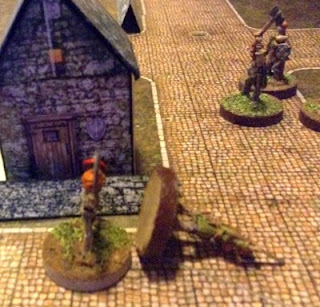 But almost as a warning about assuming the battle was won, a human ran too close and was knocked to the ground by the skeleton he pursued. 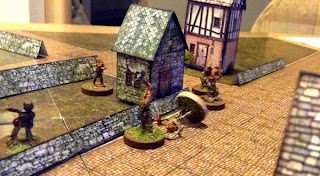 He managed to struggle to his feet again though, and the Barbarian Axeman raced round the building, leaped the low wall and buried his axe in the skull of the warrior, ending his fight. 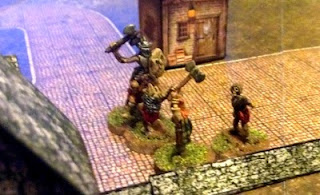 His triumph was short lived as he was closed down by some cavalry and and Walking Dead support. 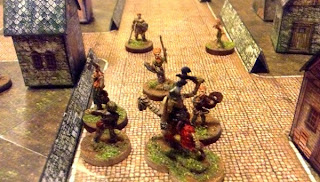 he managed to beat back the skeleton cavalry, and as the remaining Barbarian force closed in the Undead left the battlefield.

A fun battle (although Arabiansquire was having a bit of a hard time with some crucial unlucky dice rolls). The Skirmish Board really worked out well this afternoon. Literally up and playing in 10 minutes was a lot quicker than getting ready for the game of Risk that followed And to my mind more fun - although the Wee Lad will claim that's because I won.

Everything from board buildings to rulebook dice and figures conveniently fitted in the pizza box, so it was no trouble to pack with us (unlike the cursed bag of shoes that is the blight of any car packing).

And just to keep the record straight Arabiansquire completely wiped out both his parents at Risk in the most compelling display of dice karma I think I'll ever see!