If you remember my Orc Warband I was commenting on the rough and ready nature of some of the sculpts. These guys are anything but. Great detail which a real joy to paint. They are pretty heavily armoured which made me think they were from a well supplied stronghold. A feeling backed up by the inclusion of a King! 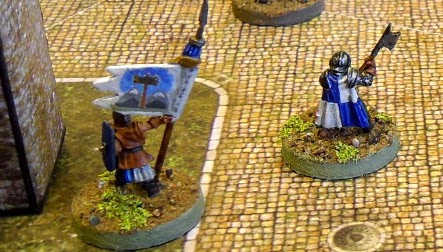 I had a bash at free handing a banner. The front is obscured by a couple of tassels, but the back is exposed. It'll not win any awards, but fills the space.

The colour scheme was inspired by the blues and metal of the cover of "Oath Breaker" by Nick Kyme (Black Library) which I read a few years ago.
Posted by Sam Pate at 09:29