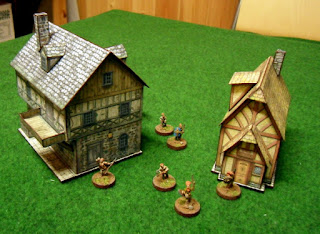 I've been feeling pretty grotty for the last couple of weeks and definitely not been wanting to be hunched over any figures with a paintbrush. However I did take the time to do something a bit more sedate (in theory) and build some new 15mm scale Dave Graffam buildings, of which I have quite a few (unmade!).
Although it is discussed in a few other places it probably worth mentioning scaling here again. Dave's buildings are scaled for 30mm, but for 15mm gaming reducing by 50% leaves them too small. General consensus is that around 60% scaling looks about right.

The first building is the Village Pub. As this is the first "proper" build at 15mm I though I'd go for something not too fiddly and to keep things even simpler I printed out the ready-to-print version included in the download. I print on 210gsm card which is gets through the printer OK but is still sturdy enough to happily stand with minimal reinforcement (especially at this size). The printout I did mean I got to experience my love\hate relationship with balconies (Love the extra look of them but struggle with getting them neatly built) and although I find it the most untidy part of my build it's not too bad. The whole thing is based on mounting board, as I didn't want too big a step for the figures. Although I originally used the full base template, I ended up cutting back the base to the flagstones at the wall base to keep the look of the buildings consistent in the future. I have ideas of creating a town layout which would look better that way. And yes I notice the slipped edging pen marks as well. I'd forgotten about them and didn't notice until editing the picture! 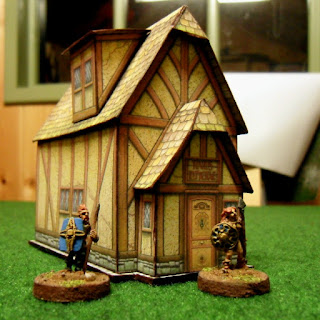 I enjoyed the the pub so much that I wanted to make another building right after. The "Wizard's Shop of Rake's Corner" will give a bit of character (and perhaps a scenario focus). It was also s smaller build as I didn't want to get fed up halfway through a large second kit. It is pretty standard apart from a more unusual roof, which was interesting to figure out.

These will add to my existing Skirmish board buildings quite nicely in the meantime.
Posted by Sam Pate at 08:06