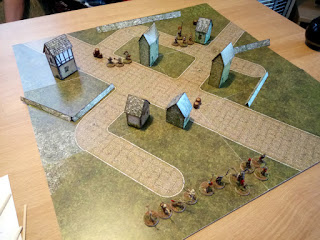 The long Easter weekend saw the us all (the family) head of to visit relatives (via the obligatory queuing traffic). Being away from the chores of work and home would give the chance to play a game with my son, so the Skirmish Board was packed.
We played a game of "Song of Blades and Heroes" using the Breakthrough scenario in one of the supplements. The Undead were advancing through the Kingdom, so a party of warriors were dispatched to stem the tide. An abandoned village was where the forces met. 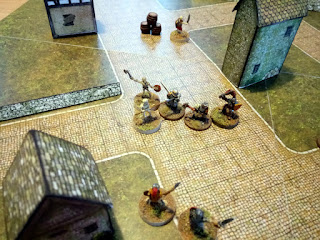 The human force advanced into the centre od the village to wait for the slow advance of the undead. A few arrows were loosed at the skeleton warriors but with little effect. Suddenly a group of skeletons rushed forward, one even bursting past the central group. 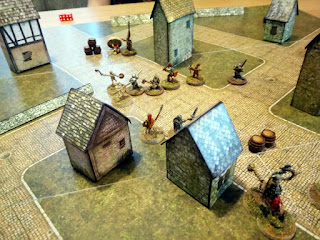 uman reinforcements moved across as it became thatthe main advance was on one side of the village. The human leader intercepted the lone boney runner. 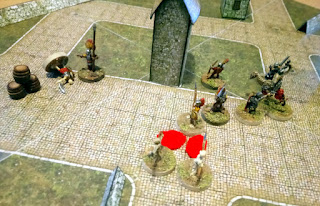 As this lone skeleton was held down there was a cry as two of the defenders were slain. There was now an open corridor for the Undead forces to rush through. The other skeletons pushed into the central area to engage their living foe. 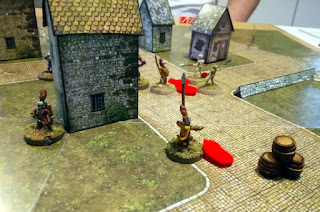 But the skeletons did not have it their own way. The leading scout was put out of action by the leader. 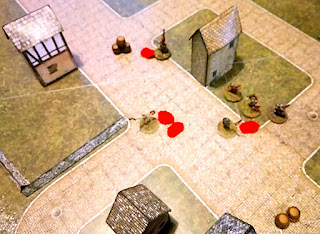 Obviously taking heart from this the mounted Undead leader was engaged and slain. Without his influence the skeleton force literally started to crumble. 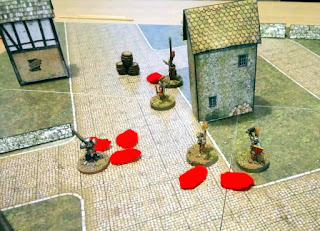 The two remaining foul warroirs tried to push on but were easy meat, ironically, for the defending force and were dispatched with no aforethought. The living civilians beyond the vale were safe.

The Skirmish Board is available from the 15mm Skirmish Supplies webstore HERE
Posted by Sam Pate at 14:46