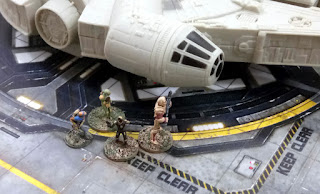 A few pictures from my first game of Rogue stars in 15mm. It was a diverse group of mercenaries 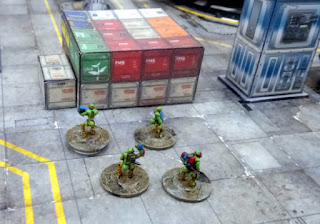 against a small squad of Spug Pirates. the Mercenaries were hired to target one of the Spugs. 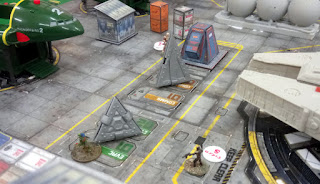 With the Spugs fitted with Quantum Harness' I had hoped to pull the Merc's out of position and catch them on the hop. But in reality I had a lot of trouble finding a suitable destination to target, especially when you take the margin of error in target zone into consideration. My heavy weapon Spug tried to catch the enemy off guard zapping onto an elevated point, but the deviation (which the opposing player controls the direction of) had him fall off the edge, where he was shot dead. 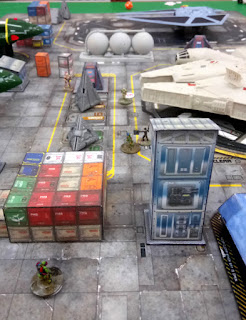 In the end the Spugs were whittled down, the large crate stack, whilst good to hide behind, was easy to cover and difficult to defend (at least for me). The game's action did finish with an entertaining hand-to-hand battle against the two leaders, both ambidextrous and landing a flurry of blows against each other.

One "problem" we had was the distances on the game. halving the distances in Rogue Stars for 15mm seemed to extreme , but we weren't sure of a good alternative at the time. If anyone has any ideas/experiences to share it would be very useful.
Posted by Sam Pate at 15:05