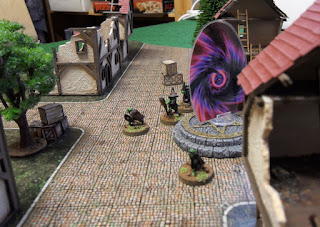 In an abandoned village an Orc Necromancer has opened a door to "the other side", looking to bring forth a new army to bolster his meagre forces. Who can stop him? 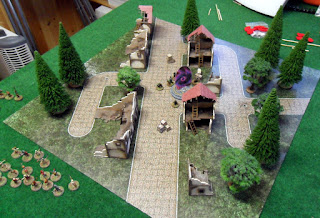 The action is set on a 2'x2' board, with the portal in the centre. At the end of a round, if the Orc magic user is still in contact with the enchanted circle d3 skeleton warriors will emerge from the portal.

The rules used were "Advanced Song of Blades and Heroes".

The Humans started with 300pts (Leader, archer, crossbow man, 2 pikemen and a dwarf) 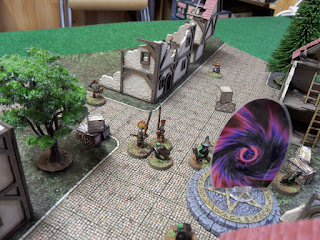 A couple of immediate turnovers from the Orcs (who were operating without a Leader) allowed the Empire pikemen to rush into the action, looking to close things down before too many skeletons came into view. The archer took a high position in the ruin to snipe away. 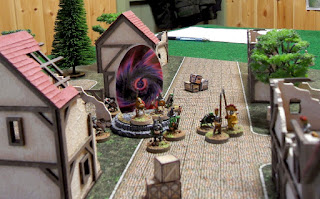 The first undead were starting to appear now. The timer was ticking. 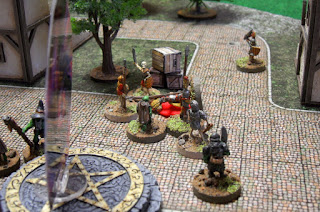 Unfortunately for the Humans a quick turnover was rolled, leaving the pikemen exposed, having not had a chance to push on an attack. With the the undead activating on a better stat than the Orcs, they rushed in to swamp the humans, and one went out of fight. 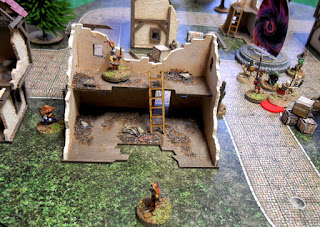 The Empire Leader made the tough decission to make a tactical withdrawal to the ruin, as it looked to late to rescue the remaining pikeman. 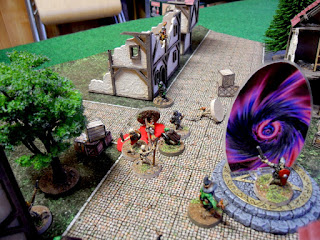 As predicted, the undead took another scalp, as more skeletons continued to appear. 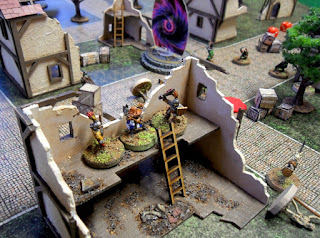 With the human crossbow still making his way from the opposite flank, the defensive position was set. The two warriors would block the access ladder and the archer would whittle down the enemy. With no archers in their midst, the tactic seemed sound. Just in time as well, as the skeletal heads started to appear round the side of the ruin. 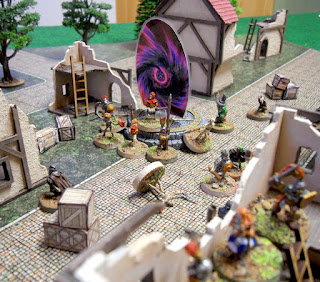 The humans had a grand view of the portal from the ruin top floor. and also all the bone heads that they'd have to deal with. 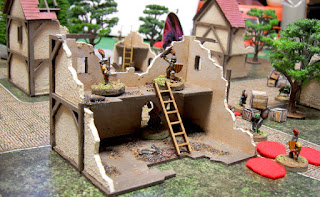 The crossbowman had finally reached accross the table. The skeletons moved in to intercept, but instead of running for cover he stepped up to take them on. Soon 3 undead were returned to their former state. Unwilling to stand in safety and watch someone else battle, the Dwarf rushed down the ladder to defend the front doorway. 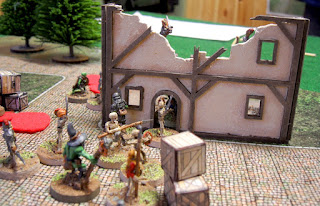 The troops gathered round the front of the ruin to storm it, with the Orc Sorcerer finally coming away from the summoning circle. 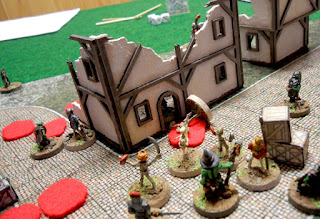 The Dwarf in the doorway had other plans though, and gruesomely slew the undead warrior in the doorway bottleneck, causing some minor jitters in the orc ranks. 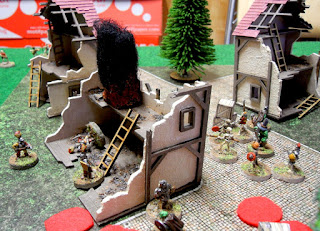 The human's had not realised that the  Orc magic user did provide a ranged threat, as it sent a fireball at the sniping archer, knocking him off his perch and setting hte building on fire. Fortunately the Leader had already vacated the first floor. 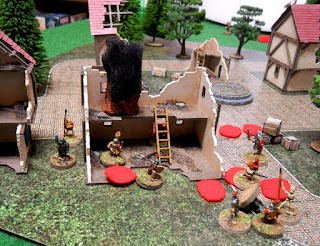 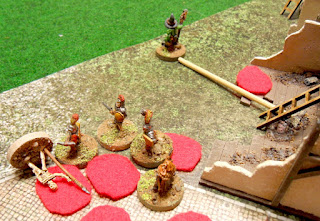 The crossbowman gruesomely took out a skeleton. This caused the Orc magic user to bolt for safety. 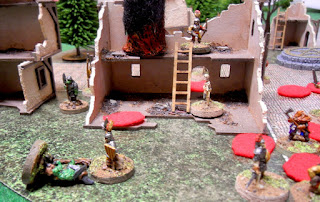 The Human leader followed up. but could only knock the Orc down. 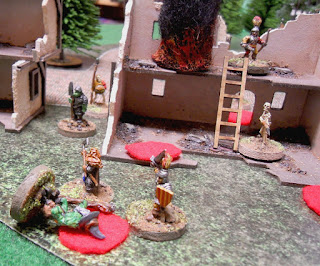 But the dwarf still had to activate and finished off the job. With the Necromancer dead, the magical bond to this world for the skeletons was broken and they crumbled to the floor. The remaining orcs ran off.
Posted by Sam Pate at 13:04