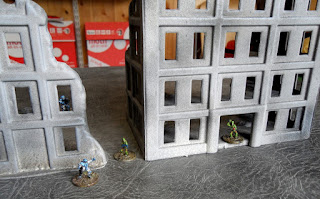 I've had these pictures for a few weeks, but I'm only getting round to posting them now. At the time Targe at Kirriemuir Wargames Club was a couple of weeks away. this was to be my second show trading, and after SKELP @ Forfar I had decided to by some display shelves. But what exactly to put on them?
Some sort of basic diorama\display seemed like a good idea. As you know from previous posts I've painted a few Amera pieces. Their Ruined Buildings seemed to be perfect display shelves for my painted 15mm Sci-Fi (the few numbers I have so far anyway!), but I'd need to get them painted in some form.

2 main focus' for this painting post. Firstly I wanted to do a basic, quick and dirty paintjob. You know, the sort that you do when you suddenly realise that you've got a dealine in 2 or 3 days for a table full of terrain that you've forgotten to make? The other was to try out Rustoleum's Concrete Effect spray paint for colour and texture.

First up I cut out all the walls and floors from the sheets. Then, using a sharp hobby knife, cut out all the windows. This is by far the longest job of this build! I then used superglue to glue the ruins together. I've used liquid Poly before which works, but Superglue gives a better hold. I also find that hot glue doesn't really get a solid bond on the smooth plastic surface enough. 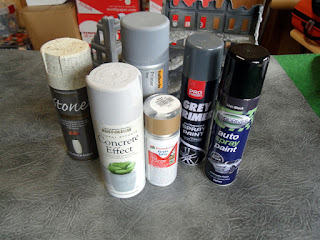 Next the cast of colour spray paints are assembled. As you can see cheap auto light grey, dark grey and black with some brown (Humbrol Acrylic). I've missed out a couple of tubes of acrylic grey & white paints that were for dry brushing. I wasn't going to apply a wash, as this was a "PANIC STATIONS" scenario and a wash would take to long to dry. It could always be applied in the future anyway! 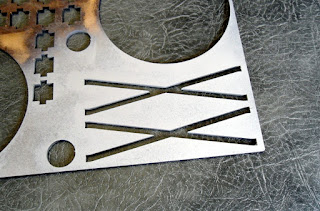 I wanted to see how the Concrete effect went on first. The other textured Rustoleum paints I'd used had shown the background paint colour (or at least for the amount that I'd sprayed on). So I dug out an old mdf "sprue", primer one part of it with the light grey Halford's Auto primer (one side of the Xs above), left the other half bare and sprayed the Concrete effect on. As you can see the coverage is very good and there is no difference between the primed and unprimed areas. The texture is a very fine and uniform grain, and very light in colour. 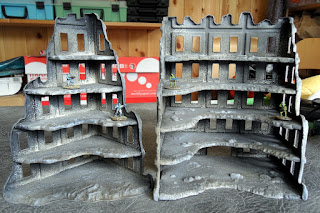 First Rough stone spray used on the floor areas to increase the texturing. The entire buildings (and floors) were primed (just to be sure),  and the walls (inside and out) were blasted with Concrete effect. Light patched sprays\dustings of the dark grey and black were applied to the walls (tempered with the odd dusting of light primer as well), and the ground and floors given a light spray of the brown. Any brown on the walls (especially round the bases) helps add to the grimy look. The process is speeded up by the fact the you don't have to wait for different coats to dry between applications, in fact its probably better if there is a little bleed. The sprays dry quickly anyway. Making sure the paints had dried, to finish off I applied a heavy drybrush or two of light gray to bring out the feature edges.